Ways to Improve Your App Ranking 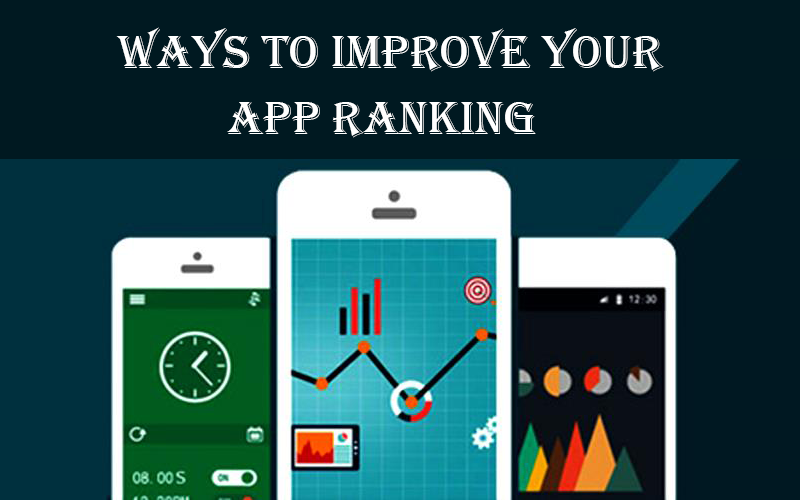 It has become a necessity whether business people use a mobile app as a revenue channel or a mobile app developer, you require seeing your app be ranked high on the store that you actually launch the app on. You have quite a few factors that adeptly impact the ranking of your app. Today we have brought a comprehensive list of ways in which you can immensely ameliorate the ranking of your app in the app stores that matter. Below are some of the ways to improve your App Ranking.

Apt Title for Your App

The app title can be utilized intelligently to communicate to every visitor the core function of your app. The app title must have a strong bearing on the appearance of your app in any kind of search results. It becomes particularly crucial of the name of your app is not really a known word and requires a certain amount of description for people to wholly understand what the app is really for.

It is wholly imperative that the right keywords are used in order to describe the intent of the app so that the zeal app users are aware of exactly what they are actually downloading. One thing that actually might work in your favour is that one must keep everything under 50 characters.

It is a crucial factor to use keywords and does not mean that you actually stuff in keywords just for the sake of it. They are vital that the keywords you use seamlessly in the native description of your app should become a part of it. One important thing to remember while developing your app description is that you should not repeat words since Google Play has a relevant content policy that particularly disallows this.

One has to create a great visual impression which is one of the top ways to attract a massive number of people to your app and largely convince them to download it. You can go through your app and select the app screens that are visually the top ones while assisting you to understand how they primarily look. Apart from selecting the app screens that look great, you can also develop a few custom screens that would adeptly showcase your best features through an engaging visual medium. When the selected screenshots are not just appealing but also enumerate the app in a good way, it certainly would activate the interest of app users eventually leading to more of them downloading the app on their respective devices.

Primarily the icon for your app is effectively the face of your app. If it is this icon that the app user is going to view first, and once they have adeptly downloaded it, it is this icon that could be the identity of the app for them. The icon of your app requires standing out, while still looking attractive on their mobile screen. It must be representative of you, without having to rely on too much relevant text with it.

Also, make sure that you keep the clutter away and have short crisp text for it. You also can do to carry out a quick look test. This could be done by placing your app icon among a number of other app icons to wholly understand how it actually looks alongside others. Not only is it crucial for the icon of your app to look quality, it should also pass this look test so that it not only belongs on the app user’s screen but immensely stands out without getting lost in the large crowd of the apps on the respective device.

This is persuasive to the iOS app as Apple allows you and even suggests you add a short video of about 15 to 30 seconds as a good part of your app listing. It also makes use of it to showcase the multiple feature functionalities within your app. You could even test the video with some engaging poster frames or lucrative thumbnail images to figure out which ones are instantly driving more and more passionate users to click and watch the video. Even on Google Play too you could add a video to the app listing. Also, it might work well when the app is a paid app, since developing a video does entail a specific expense that you could like to recover through your app.

The reviews and the ratings from users really ameliorate the overall ranking of your mobile app on the popular app store. You can get everyone to write a positive review, but expect some kind of writing which is healthy and positive app reviews, since this is the real deal, the quality place where you could get some good genuine feedback to assist you to ameliorate your app and increase the overall app experience for the users.

Another key thing here is to greatly acknowledge and answer each and every negative review you could receive on the app store. It might be somewhat impossible to actively respond to each one of them, but when you primarily reply to the negative reviews, you illustrate that you care about a good user relationship. Additionally, the people visiting your app would get the high impression that you pay attention to the difficulties encountered by the app users and assist them out while taking in their active suggestions.

It is of prime most importance that obtains your app indexed with Google. Google App Indexing is the actual system that allows any app listing appears on a search results page. Moreover, the user primarily clicks on the listing before reaching inside the app. This professionally works for both the fame Android and iOS mobile apps.

When a user eagerly searches for a specific app that they haven’t yet installed, they are then taken to a mobile webpage wholly dedicated to the mobile app. If your app is not indexed, you can stand to miss out on the searches that could illustrate your app as a listing. Even the direct impact of indexing might not be instantly visible on the overall ranking of your app. It is also proven to bring in organic incoming traffic that does assist in achieving your mobile app ranked higher.

Primarily the use of App keyword Research is crucial and goes a long way in the discoverability of your app and wholly determining whether your app would adeptly feature in searches. Moreover stuffing your app title or app description with a lot of keywords is not enough though, nor is it actually wise to do so.

Also imagine if you were the one searching for an app that would be beneficial for social networking and install an app that utilizes just the right keywords, allowing you to believe that the app is best suitable for you. So it is vital that you use keywords in the app title and description in a wise manner. Altogether you have come across some of the ways to improve your App Ranking.